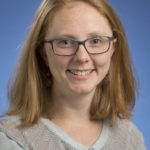 Kelsey Terland MD was raised in Corvallis, OR and attended college in Portland, OR. Seeking adventure, she moved to Anchorage, AK in 2007 with the Jesuit Volunteer Corps. She initially planned to be in Alaska for just one year but the magic of Alaska stuck and she has been here (off and on) ever since. After spending some time working in social services with dementia patients, Kelsey decided to go to medical school. She attended the University of Washington School of Medicine. Through the WWAMI program she was able to complete most of her medical school training in Alaska. After graduating from UWSOM, she moved to Boise, ID to complete her family medicine residency at Family Medicine Residency of Idaho. She served as a chief resident during her third year of residency. Even prior to medical school, palliative care is where Kelsey’s heart has been. Following completion of residency Kelsey returned home to Anchorage to participate in the Providence Hospice and Palliative Medicine Fellowship. Kelsey is so grateful to be able to continue to work with the Providence Palliative Care team with whom she has found her home.
Outside of medicine Kelsey enjoys spending time with her husband and two energetic little boys, exploring the wilds of Alaska.