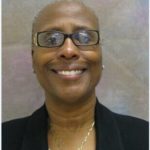 She has served as Interim Pastor of an American Baptist Church, Associate Pastor and Director of the Chaplaincy Department in the Washington, D.C. and Maryland areas. In military Chaplaincy she has served as the 92nd Field Hospital and 2290th Hospital Reserve Chaplain. She came on active duty in 1995 and served at Walter Reed Army Medical Center as a Clinical Pastoral Education Supervisor, and the first African-American female to develop and direct a Clinical Pastoral Education program for the U.S. Army.    This was the first time in the history of the U.S. Army that Madigan Hospital had such a program for training its Army Chaplains.   She is a retired Lieutenant Colonel Chaplain and  has served in the following positions:  President of the largest Network in Association of Clinical Pastoral Education, the Racial Ethnic Multicultural Network; Past President of Delta Sigma Theta Sorority here in Anchorage, AK.  Her present position is that of Manager of Clinical Pastoral Education at Providence Alaska Medical Center and the Farwest Regional Chaplain for Delta Sigma Theta, Inc. She is an Associate Minister at First American Baptist Church in Anchorage, AK.  She is an author and editor of Theologies from REM’s Women of Color. She’s been managing and Directing Clinical Pastoral Educations programs for 25 years. Her motto is God’s Love, Peace and Harmony to You, Shalom Shalom